‘Machine’ and ‘Vision’ – two words that on their own are quite innocuous, when combined to create. ‘Machine Vision’, bring a distinct change in the perspective. Not only does it sound formidable to the uninitiated, but also forebodes the notion of humans losing jobs to machines that can easily mimic or even surpass several of human abilities. While machine vision has a history of about half a century, human vision has evolved over hundreds of thousands of years, and as a predominant sensory mechanism, played a vital role in their understanding of the environment and gaining control over it. Despite the optimized capabilities, human vision has limitations due to physiology and genetic variations. The environmental and psychological factors also contribute in how humans see objects. These limitations become of concern in industrial settings, especially in quality control inspection, where there is an increasingly greater demand for accuracy with speed.

In this context, a question often arises in minds of manufacturers – can humans be taken out of inspection tasks completely?  Read on for an insight into factors that could contribute to the ‘human’ or ‘no human’ decision.

The foregoing inadequacies of the human eye and demands on physical abilities have sometimes necessitated substitution of human inspection with machine vision solutions. A machine vision solution built around the right camera, optics and algorithm can outperform human vision in an inspection task because of its speed, accuracy, and reliability. Above all, 100% inspection (entire population instead of random samples; and considered necessary in some safety and biomedical domains) can be achieved efficiently by applying machine vision, which would be an extremely slow and expensive option when performed by humans. The succeeding paragraphs discuss some salient applications where machines may advantageously replace humans.

Applications such as segregation, sorting, counting of items, etc. where perceptual quality is not the key decider on the acceptability or rejection of a product, can be achieved at a very high rate, round the clock, and to a very high degree of success, even for different kinds of objects using machine vision.

Optical character recognition (OCR) applications in which printed, stamped, or inscribed text is to be identified or authenticated against a stored value are categorized as OCR/OCV applications. These tools are deployed in several critical applications such as food and beverage industry, semiconductor and pharmaceutical manufacturing, and have achieved >99% accuracy. While the human brain is trained to recognize characters from a very young age, the volume, rate and monotony entailed during such inspection often surpasses human capacity.

When the object or area under observation is too small in size to see unaided, as in case of micro-cracks in solar cells, pin-hole defects in packaging, cracks in metals, etc., human inspection would require additional aids for magnification. With machine vision, a single object, however tiny, can be observed with appropriate magnification from different angles and the ‘go’ – ‘no go’ for the item can be programmed accordingly.

Objects like automotive chassis, aircraft brake discs, wheel rims, engine block, etc., that are large in area or heavy in terms of weight, need to be inspected for quality. They are generally positioned on an inspection platform with the aid of pneumatic loaders or a gantry system. For humans to perform this task could be a tedious process involving repositioning of the object for inspection from different angles. If the object has a large surface area, it might take an even longer time to inspect, increasing the chances of a defect being missed out. Inspection of heavy and oversized objects can be achieved in a more efficient manner by building a mechanized machine vision inspection system that inspects the part and with even greater accuracy.

Inspection of industrial products where gauging and metrology needs to be done, are good candidates for machine vision application because it can perform defect detection and dimension measurement in the same run, at a high speed and with great accuracy. Also, Human inspection involves contact gauging, and there is possibility of errors due to inter-rater differences and overall measurement conditions. Machine vision being a non-contact method prevents damage or contamination of the part being inspected. It can measure objects down to the micron level precision and provide an automated feed for statistical process control and traceability. Measuring and recording the dimensions of a medical devices like a needle, valves and actuators; precision manufactured parts used in the defense & aerospace industry, automotive industry, and so on, have clear scope for such applications.

The human eye is constrained to see only in the visible spectrum (light with wavelengths of 400 to 700 nanometers). Tasks where the object has to be illuminated by a source that emits wavelengths outside the visual spectrum, necessarily need to be performed with help of machine vision systems.

Elimination from an industrial task due to physiological limitations will seem intimidating to any human. But there are quite a few instances where dynamics and simultaneity call for human inspection, since it results in a better evaluation in comparison to a machine vision solution. Ergo, human inspection becomes indispensable in such cases.

By virtue of their intuition or heuristics, humans are capable of distinguishing even slight variations in part appearance and have an appreciation of whether that may affect the perceived quality of the object under inspection, before rejecting the part as defective. This judgment can be applied in novel situations, like inspecting a product from different angles (even if the view gets occluded or is obscured) by simply picking it up and deciding on the pass – fail criteria. Any occlusion of the object will be unusual for the machine vision system and result in a ‘reject’ or a ‘false positive’. To achieve accurate results from machine vision system under such situations, the software will have to be programmed, and special material handling will be required to get multiple views of the object.

Humans have a natural ability to conceptualize and generalize which is absent in machines. When faced with an unstructured, complex situation, like those in case of unpredictable flaws, humans can choose the best option for a qualitative interpretation of anomalies, through transfer of learning. In case of machine vision, inspection of scratch on different kinds of objects and materials necessitates a different setup for lighting, training data and in some cases, even algorithms. A human on the other hand, can easily identify any type of scratch irrespective of the material, and classify it as a defect, purely by applying prior knowledge.

Human in the loop:

In cases where the probability of miss outs is high i.e. the nature of defect is well defined, but still occurs, co-application of machine vision under human supervision can be adopted. The objects that are good are declared so and when there is a doubt, the item is passed on to a human agent, who cross-inspects the item and declares it fit or unfit. There are cases of drift as well. Over a period of use unanticipated product samples can appear under the camera, those that vary too much from what the training has assumed, resulting in a data (image) drift. This can lead to degradation in performance of the software. Hence human in the loop automation, where at various points along the way, humans are given opportunities to interact and improve the algorithms by periodically updating them with fresh training data.

Trigger mechanism plays an important role in the image acquisition stage of machine vision. A trigger input is connected to a photoelectric barrier. When the object under inspection passes the barrier, it outputs a pulse that triggers the industrial camera to capture the image. Though in most cases manual triggers have been replaced by hardware or software triggers, some legacy applications may still require push buttons and dip switches operated by humans, to trigger the cameras.

Presently, humans are an integral part of a machine vision system in more than one way. The range of applications where machine vision can be applied without human involvement is vast, but its ability to adapt to diverse settings, on the fly, is yet to be perfected. Machine vision may in all likelihood surpass and do away with the need for humans in industrial inspection, the quintessential question however is – when?

How do you like our blog? Let us know in the comment box. Also feel free to ask anything related to the same topic. 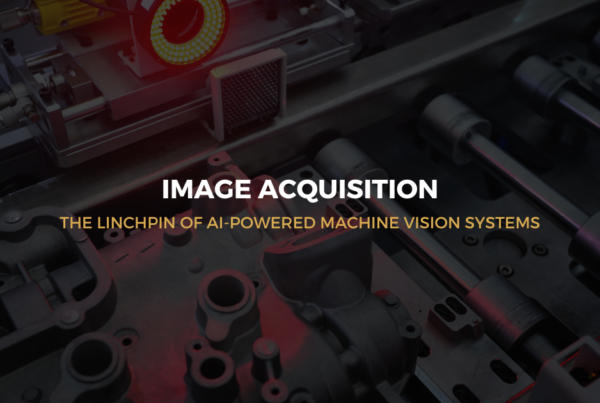