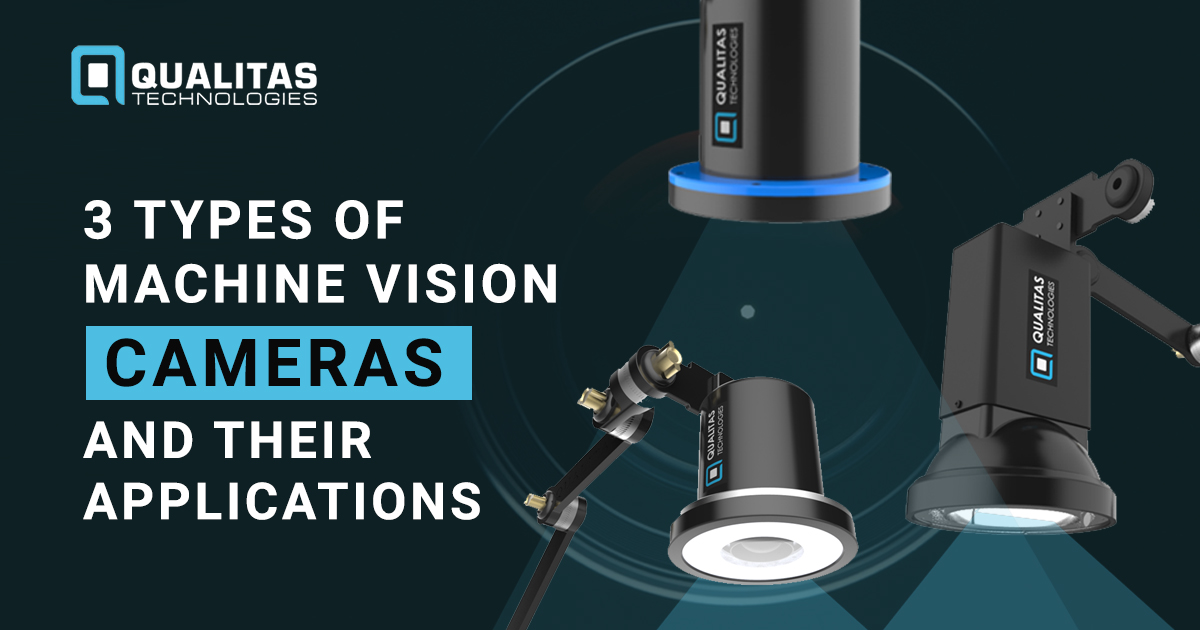 Incorporating the right kind of camera can carve out considerable savings in time and resources. However, choosing the right fit for your vision application from the enormous range of options available in the market may prove to be a challenging task. While commercial cameras offer good resolution and cheaper options, they cannot be used in vision systems because machine vision cameras serve entirely different purposes. Some critical features of a machine vision camera are:

Let us now dive directly into the different types of machine vision cameras available to gain a better understanding of their distinctive features and uses.

Cameras can be classified into three categories on the basis of image format, which are:

On the basis of acquisition type, cameras are of two types, namely:

2D machine vision cameras scan images by using two-dimensional maps of reflected intensity. Just as the name suggests, 2D cameras lack the element of height. So, we now know what 2D cameras are. Let’s now understand how do sensors perceive visual data and what’s actually happening inside a 2D camera.

An image can be broken down into a matrix of pixels. Each pixel has an intensity value. In monochrome cameras, this value ranges from 0 to 255. 0 corresponds to no light acquired, and 255 corresponds to the maximum light acquired. Similarly, each pixel in a color camera stores RGB (Red Green Blue) values. The information is perceived in the form of these values.

Each sensor is subdivided into these pixels. In turn, each pixel is composed of a lens and a photo-diode. The lens is responsible for projecting the light and directing it to the photo-diode. Then the photo-diode converts this light energy into electronic energy. Following this, there is an encoding done that gives you a number between 0 to 255 (for monochrome cameras). In the case of color cameras, there are three color filters, one each for red, green, and blue. These filters generate three different intensity values for the three colors. This is the difference between monochrome and a color camera. The fundamental idea behind the color and monochrome camera, however, is the same. In both cases, we have a bunch of pixels getting the light to photo-diodes that generate a digital value.

3D machine vision cameras capture the dimensional data from all angles. These cameras provide a point cloud, i.e., a digitized model that stores data related to both position and shape. Since these cameras can capture the additional element of depth, 3D systems can overcome the lighting and contrast limitations that pester the 2D systems. Majorly, there are four different types of 3D cameras, which are:

This 3D vision camera is based on a pulsing light illuminating the desired area. The camera calculates the depth on the basis of the time taken by the pulse to hit the object and reflect back.

In laser triangulation type, a laser is projected onto the object. Based on the pattern change in the laser, the camera is able to triangulate the height using trigonometric functions.

Stereo vision uses two 2D cameras. These two cameras are akin to human eyes that capture 2D images of objects. Then, the images are superimposed to form a 3D image using specialized algorithms. 3D stereo vision is used in robotics and surveillance applications.

Structure light is the same as laser triangulation except that it projects a structured light onto an object, and based on the pattern, it recalibrates the heightmap.

Visible wavelengths are only capable of inspecting objects superficially. For instance, UV imaging is quite prevalent in material crack and fault detection. It is because the tiny internal cracks become visible in the UV spectrum once they have been treated with some specific materials.

A spectral camera is the kind of camera that can “see” wavelengths of light outside the visual spectrum range. Such cameras are quite powerful because they offer many additional capabilities. Infrared light becomes especially useful in the inspection of natural products. Say we have to inspect apples. Infrared imaging will show a difference of color intensity if an apple is a rotten inside, which an RGB camera cannot.

To generate a 2D image using a line scan camera, the object is made to move along the narrow axis of a sensor, scanning one line at a time and reconstructing the image using the software.  As the item moves past the camera, the entire image is constructed line-by-line. Due to high frame rates, line scan cameras can generate extremely high-resolution images at high speeds.

In this post, we discussed the different types of cameras, their uses, and their features. Ultimately, you have to scrutinize your intended application and environment to select the right fit for you.